Developers of a new waterfront community in the Vancouver suburb of Richmond, worked with Golder Associates to address significant underground challenges during the excavation for their underground parking. The site, which is adjacent to a former Olympic venue and now a popular recreational facility, is located on the Fraser River. The presence of coarse-grained sands and a high water table onsite meant that significant pumping to dewater the excavation would be required which could potentially lead to dewatering-induced settlement affecting nearby roads and structures.

Golder’s Construction Division implemented a cutter soil mixing technique, an innovative technology involving the insertion of a cutter head into the ground while injecting cement-bentonite slurry and mixing it with the native soils to form a low permeability cut-off wall.

In the December 2015 issue of Construction Canada Magazine, David Siddle and John Scholte of Golder’s Construction Division, discuss the application of cutter soil mixing and factors to consider in helping lead a project toward success.

Waterside development in a major city is likely to be desirable, particularly when it is adjacent to a former Olympic site that has since been transformed into a thriving recreational and sport centre. In the Vancouver suburb of Richmond, these two opportunities were presented along with significant underground challenges for Aspac Development—the developers of the new high-rise residential waterfront community, River Green.

The site’s location—right on the Fraser River—and the presence of coarse-grained sands onsite, meant the high water table would likely require considerable pumping to dewater the excavation. While the pumping itself is costly and has potential to interfere with construction, the bigger issue had to do with the possibility of dewatering-induced settlement of the area around the excavation, affecting nearby roads and buildings.

Right next door to the River Green site is the Richmond Olympic Oval, built for speed-skating and other events of the 2010 Olympic and Paralympic Winter Games. This building is now a popular fitness, recreation, social, and competitive facility. City authorities were monitoring the construction at River Green closely to be sure that there would be no significant impacts to the structural or cosmetic integrity of the massive Oval.

The means by which concerns about potential settlement of the adjacent structures were dealt with point to some useful lessons on how to apply cutter soil mixing—an innovative technology starting to see greater applications across North America.

Traditional excavation shoring and dewatering techniques often include the use of a structural shoring element, combined with well points or dewatering sumps to control groundwater inflows. For the large majority of excavation sites, these conventional methods are tried-and-true and cost-effective.

In the Richmond area (and other locations with similar characteristics), the presence of a high water table and the extensive deposit of granular soils make the use of conventional methods problematic for deeper excavations. The drawdown of groundwater can cause settlement of structures in the vicinity of the excavation resulting in cracking and slumping of buildings and infrastructure. Often, the challenges and risks associated these deeper excavations make the inclusion of large underground parking structures impractical, despite the value the underground parking would add to a building project.

Sidestepping the need for extensive dewatering

One option to eliminate dewatering-induced settlement is to reduce the amount of dewatering necessary in the first place. By minimizing the amount of water entering the sides and base of the excavation, the drawdown effect and potential impacts to surrounding structures are also reduced. A hybrid solution that included both a structural shoring element and deep cut-off wall was proposed for the site, with cutter soil mixing deemed to be the ideal technology for the project.

The CSM method, developed from cutter technology, makes use of two sets of cutting wheels that rotate about a horizontal axis to produce rectangular panels of treated soil. It employs a track-mounted, mobile piledriving machine with a vertical mast up to about 30 m (100 ft) in height to insert a mixing/cutter head into the ground while injecting and mixing slurry of bentonite and cement with the in-situ soil.

After the cutter reaches the target depth of up to 30 m below surface, cement slurry is injected down the shaft. As the cutter’s wheels are pulled back toward the surface, they continue to spin, mixing the cement into the soil to create a column of soil-cement mixture. A continuous wall is formed by a series of overlapping primary and secondary panels. When properly built, the cured soil-cement forms a low permeability cutoff wall that also has significant structural strength, helping form a retaining wall for the excavation.

For the River Green project, the combined cutoff and retaining wall extended 350 m (1150 ft) around the property and to a depth of 28 m (92 ft) below existing ground. To provide the necessary structural support to the shoring component of the wall, H-pile reinforcement was added to the CSM panels at regular intervals in the upper 13 m (43 ft) of wall.

CSM technology allowed the wall to be built in a narrow footprint—650 mm (26 in.) in width—to maximize the property available for development. The equipment used for the work has a low noise impact, and is nearly vibration-free (a huge advantage over the alternative of driving sheet piles), which reduced inconvenience to neighbouring stakeholders, as well as vibration damage to the Richmond Olympic Oval.

As with any technology, there are factors that help lead a project toward success. Here are some observations, based on the learning from the River Green project.

1. Bring in qualified expertise early in the project lifecycle

As in any project, having qualified expertise available early in the project’s design can help achieve the best outcomes. Innovative approaches to problem-solving using advanced techniques, such as CSM, can be worked into the project plan, design, and budget. Further, regulatory authorities can be consulted early on, and provided with enough information so as to gain approval for the project.

For the River Green project, design/consulting firm Golder Associates’ Construction Division worked with the project designers and owners to optimize the design and take advantage of the benefits of CSM.

The technology allows for customization of the slurry injected at each elevation in the wall. At River Green, this allowed for the installation of a composite wall with a higher-strength upper portion and a lower permeable bottom portion. The upper 13 m (43 ft), which functioned as a shoring wall, were constructed using soil-cement panel with target strength of 4 MPa while the lower 15-m (49-ft) portion, which functioned as a cut-off wall, had a lesser strength requirement of 0.5 MPa. Significant savings were achieved in material and mixing costs because of the ability for the CSM to install panels with varying strength profiles across the depth of a panel.

2. Monitor groundwater in order to warn of problems and demonstrate compliance 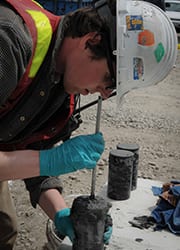 Although the application of CSM for this project was proven to minimize drawdown of the groundwater around the excavation, it is still essential to continuously monitor the groundwater levels around the construction site and at the neighbouring buildings while dewatering continues.

At the Richmond Olympic Oval, a drop in groundwater level was observed following the completion of the excavation at the River Green site, and engineering staff from the City of Richmond were justifiably concerned. These observations were initially very puzzling to the engineering team as it was evident from the dewatering that very little water was being pumped from the River Green excavation.

Further investigation found the dropping water table was not due to work at River Green, but at another building excavation in progress some distance away, which was being built with conventional sheet piles and evacuation wells. This is clear testament of the need to manage drawdown in the coarse sands and the effectiveness of a cut-off wall to reduce dewatering effects for future developments in the area.

Today, the use of cutter soil mixing is growing in both Canada and the United States—it will continue to see wide applications in the future, for cutoff walls particularly in difficult soils, or where there is need to support a building in other types of challenging soil conditions.

ABOUT THE AUTHORS
David Siddle, M.Eng., is a project manager in Golder Associates’ Construction Division and focuses on cutter soil mixing and other ground improvement projects. He can be contacted via e-mail at david_siddle@golder.com.

John Scholte, M.E. Sc., P.Eng., is a geotechnical engineer and a principal in Golder’s Construction Division, based in Vancouver. He specializes in civil-geotechnical construction and design-build projects that involve ground improvement, slope stabilization, cut-off walls, and large-scale slope depressurization/dewatering. Scholte’s experience with cutter soil mixing extends back to the first application of CSM in North America as part of the foundations for the Nanaimo (B.C.) Conference Centre in 2006. He can be reached at john_scholte@golder.com.