Sometimes solutions to today’s most pressing challenges come from technologies long used for other applications. One of these is electrocoagulation (EC) – “electro”, which means applying an electrical charge, and “coagulation,” which means causing matter suspended or dissolved in water to form an agglomeration. In use since the first EC apparatus was fabricated in the 1940s (the first patent was produced in 1909 in USA), EC has become a mature technology in electroplating and metallurgy.

Now EC is seeing increasing use in another world entirely – the treatment of contaminated water including landfill leachate, industrial wastewater, oily bilge water, greywater and blackwater from ships, municipal sewage, and household domestic greywater for reuse. Recently, Golder has started to apply this technology in the mining, solid waste and transportation sectors.

EC works by flowing the contaminated water through at least one pair of metal electrodes – a positively-charged anode, and a cathode carrying a negative charge as illustrated below. 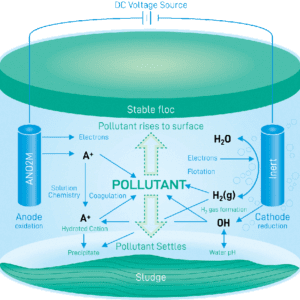 Positively-charged metal ions (cations) leave the anode and bond with the negatively charged contaminants (anions) by charge attraction until charges are neutralized. On the cathode side, hydrolysis occurs, which means splitting water molecules into hydrogen and hydroxyl ions. Then, the hydroxyl anions combine with the metal cations to form metal hydroxides onto which the contaminants adsorb and absorb. Many metal hydroxides combine together to form flocs.

The hydrogen bubbles formed at the cathode help agitate these flocs and push them upwards in order to separate them from the water. Sometimes, when not enough hydrogen bubbles are present, the flocs simply separate from water by decantation. In addition, dissolved charged contaminants can be either attracted to the anode or cathode and therefore be removed from water.

The result is treated water that, in many cases, can be released into the environment or the city sewer with only minimal further polishing or can be reused in an industrial process as wash water or for non-potable domestic purposes such as laundry, toilet-flushing and irrigation. The contaminants are removed in the form of a physicochemical sludge, which in some cases can be further treated to recover metals that can be sold to recoup operating costs or be used as fertilizer if its quality allows it.

Applying Electrocoagulation to Other World Problems 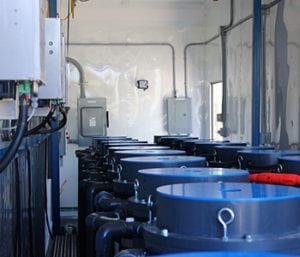 EC system in a container (Photo courtesy of E2Metrix)

There are now reasons to think that this long-established technology in industrial processes may play a big part in solving water-related problems facing the world. There is a growing number of commercially-available systems using EC for water treatment. At one end of the market, in final stage of development are small units adapted for home use – such as for a residential property located far from municipal sewage treatment. Compact, durable units have been developed for sewage treatment onboard ships, able to continue operating even if the vessel pitches and rolls in heavy weather. Other EC containerized units have been tested at military bases to evaluate their fast deployment capability.

Larger EC systems have been developed for treating landfill leachate and industrial wastewater, as well as mine water, which is water that flows out of a mine and often contains salts and metals and ammonia nitrogen.

Recent research has shown the ability of EC to be modified to remove specific contaminants in the water – anodes made with magnesium, for example, have been shown to be successful in removing ammonia nitrogen during an EC-assisted struvite (a molecule made of equimolar concentration of orthophosphate, ammonium and magnesium) formation process.

Also, major improvements have been made in recent years in anode and cathode cleaning methods in order to displace contaminants and debris from the anode and cathode surfaces, so that they retain their abilities to release cations, hydroxyl and hydrogen bubbles.

Researchers have recently found that it is possible to “tweak” the process by using different metals as the anode or cathode, to remove contaminants of particular concern.  This includes using magnesium anodes to support removal of ammonia nitrogen or using zinc electrode to remove Per-and Polyfluoroalkyl Substances, collectively known as PFAS.

Unlike chemically-assisted coagulation, EC does not involve any added chemicals, with the one exception of specific contaminants removal such as ammonia nitrogen when the struvite process is used and if the water does not have enough magnesium or ortho-phosphate. And unlike biological treatments, it is instant-on – just flipping a switch sets the process in motion. Moreover, the residence time in the EC reactor is quite short — 20 minutes or less, making it a compact and efficient system. Also, EC electrical consumption is quite reasonable in the order of 1 kW/m3 or less, varying on the electrical conductivity of the water.

Currently, the cost structure of EC means that this technology is seeing greatest use with particularly challenging wastewater streams where multiple contaminants must be removed simultaneously from water. But the range of situations for which EC is a cost-competitive solution is rapidly expanding due to improvement of its performance and reliability for various water streams. The EC operating cost varies with respect to the nature, electrical conductivity and volume of wastewater to treat and typically varies in the range of two to three US cents per cubic metre, which is cost-competitive with conventional and new commercial treatment such as granular activated carbon or other adsorbent media, chemical coagulation, reverse osmosis, etc.

In general, it can be said that EC is a new alternative to conventional treatment such as biological treatments, filtrations and chemical coagulation. Its main advantages compared to these conventional treatments are its relatively small footprint, modularity, treatment robustness and rapidity, without the need of chemicals. However, EC is not applicable to all wastewater treatment requirements and thus its feasibility must be studied in comparison to other treatment methods.

Golder’s research and development is helping to push the envelope with EC for water treatment — improving its practicality, utility and cost-competitiveness. This has included designing a treatment system expected to start up in spring of 2019 that includes EC for groundwater impacted by leachate from a municipal landfill. Golder has also demonstrated the practicality of EC for treating mine water at the laboratory and pilot stages as well as application for transportation projects, helping to improve the effectiveness of an existing EC system used for treating wastewater that includes oil and grease, as well as surfactants used for washing large transportation vehicles such as rail cars.

Dr. Léveillé is a senior consultant at Golder based in Montreal. During her career, she has developed, commissioned, and optimized domestic wastewater treatment and drinking water and industrial water treatments for homes, isolated communities, ships, military bases, schools, mines and the food and cosmetic industries.