Greenland has a mineral-rich geological terrain and many associated business opportunities. As a self-governing entity of the Kingdom of Denmark, Greenland has made significant headway in progressing the opportunities presented by their natural resources by implementing legislation that is both investor-friendly and environmentally responsible.

Golder has supported NAN throughout their journey and continue to work closely with the company, through an environmental due diligence and an ESIA process, including the development of the Terms of Reference, public hearing, and the development of a White Paper.

To read the full article published in Mining Journal, please click here, or continue reading below. 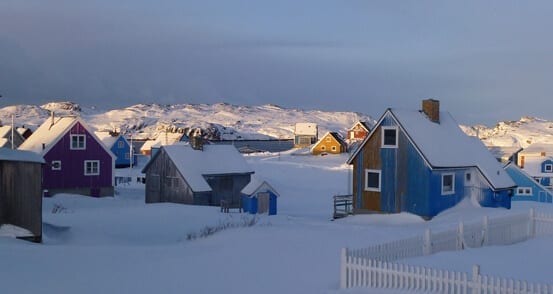 Greenland has come a long way as a resource-friendly address, but has a way to go still.
Photo: Marc Hansen, Golder Associates

Greenland has a mineral-rich geological terrane with ample business opportunities. As a self-governing entity of the kingdom of Denmark, Greenland has come a long way by implementing legislation that is both investor-friendly and environmentally responsible.

However, the vast country has both arctic natural environment conditions and limited infrastructure – most locations are reached only by boat or helicopter – which combine with relatively new regulatory procedures and cultural hurdles (both linguistic and administrative) to complicate exploration and development processes.

With new mining supportive policies in hand, the government is moving forward with ambitious plans for development in the minerals sector.

This has attracted a number of explorers and developers, including North American Nickel (NAN). NAN is a Canadian junior exploration company focused on its 100% -owned Maniitsoq project located in southwest Greenland, which has emerged from a stable of holdings the company has been working on since 2011.

The Maniitsoq property is within the 75km x 15km Greenland Norite Belt that hosts numerous nickel-copper sulphide prospects and multiple exploration targets. Maniitsoq has caught industry attention as a potential a new nickel district, which includes the high-grade Imiak Hill Complex (more than 7% Ni). The geological setting is unique though similar in some ways to a range of major nickel deposits including Thompson and Voisey’s Bay.

NAN completed a worldview-3 satellite data acquisition programme across the entire property in 2015 and has several drill-defined areas of significant nickel mineralization for follow up next year.

Far from being put off by a lack of mining pedigree in Greenland, NAN has been largely glowing in its description of the framework thus far. Among the boxes ticked are the stable, democratic political set-up and pro-mining government; transparent regulatory system with competitive mining tax regime and absence of land claim issues; a
south west coast free of pack-ice enabling year round shipping; and a capital in Nuuk with a modern, well-serviced port and European standard logist ical support services.

Concurrent with the exploration programme, NAN’s corporate social responsibilities brings a strong focus to local involvement in the project by using local suppliers and employing local Green landers. Since commencing the project in August 2011, the company has spent some US$6.65 million in direct exploration spending – more than 60% with local firms.

All mining and oil exploration is governed by the Greenlandic Mineral Act supported by several guidelines.

The Greenlandic government uses a “one door” principle, meaning the companies one point of government contact is the Mineral License and Safety Agency (MLSA), thereby simplifying dealings.

The government advises companies to spend two-to-three years to satisfactorily complete an SIA. Meanwhile, the EIA process starts with a scoping phase followed by up to three years of baseline studies.

Upon completion of the EIA and SIA, both are the subject of an eight-week public hearing period combined with presentation meetings at cities/villages affected by the proposal.

For Maniitsoq, a conceptual planning workshop was carried out initially, focused environment, engagement, exploration and engineering (the four Es) as they relate to strategic project development planning. Milestones were set at 90 days, nine months, and four-year intervals.

This integrated approach linked with specific timelines allowed NAN to provide a clear vision and path forward for corporate planning, implementation and communication to investors.

A conceptual economic assessment was also carried out for the Maniitsoq project to generate an economic model based on preliminary knowledge of the deposit. This included two resource scenarios based on various grades and tonnages. Cost estimates were developed through capacity factoring, parametric models, similar projects, judgement or analogy.

Baseline studies have commenced for both environmental and social assessments.

NAN has been keen to emphasise its corporate social responsibility (CSR) and local involvement initiatives since exploration started. Golder Associates has supported NAN in planning and organising yearly CSR tours to local communities along the licensee area that may eventually be affected by the mining project.

During these meetings, exploration updates are presented to the communities and every effort to integrate local businesses into the project are made. NAN is committed to furthering educational opportunities through local hiring and training and presentations at local academic institutions.

In connection with negotiations between the MLSA, NAN requested Golder to run environmental due diligence of the abandoned Seqi port facility, including soil sampling and an environmental baseline study.

NAN has continued drilling in 2016 and expects to have the results from the assay of core samples before year end. The company has also initiated dialogue with the authorities regarding possibilities for development of a hydropower facility for Maniitsoq.

Golder will be supporting NAN in the delivery of a preliminary investigation of the legislative basis for the process of acquiring a perm it to establish a hydropower plant.

Depending on the results of the exploration programme this year, NAN has expressed the likelihood of an ongoing drill programme in 2017. Golder will support the EIA and SIA process, including the development of the Terms of Reference, the public hearing processes and required White Paper.

In the event of the discovery of an economic nickel deposit, the infrastructure projects would be forthcoming and include a hydroelectric facility to supply power to the nickel mine and mill, camp site, a deep water port and road or pipeline construct ion from the mine to the port.