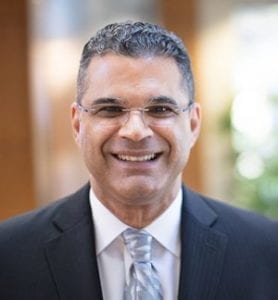 Golder Associates, the global consulting and engineering firm, announces today that it has appointed Dr. Hisham Mahmoud as its President and CEO. Dr. Mahmoud has been appointed to this role after an extensive global search over recent months. He will be based in Atlanta, Georgia.

Dr. Mahmoud’s career spans some 27 years, the majority of which has been in diversified global engineering and construction companies. He joins from SNC-Lavalin where he was hired in 2013 as part of the new executive team. There he served in the newly-created role of President of the Infrastructure Group, which included the company’s Infrastructure Concession Investments (ICI), Engineering, Construction, and Operations & Maintenance Businesses. Upon announcing his departure, SNC-Lavalin commended Dr. Mahmoud publicly for his lasting, positive contribution to the company. He was credited with tackling very challenging parts of the business, creating an efficient structure and world-class team, and preparing the groundwork to help the company move forward and reach its goals. This included the company’s pursuit of some of the largest infrastructure projects in its markets, highlighted by its recent successes.

Dr. Mahmoud joined SNC-Lavalin from AMEC, where he last served as Group President, Growth Regions, responsible for the company’s Mining, Oil & Gas, Power, and Environment & Infrastructure business in the Middle East, Africa, CIS, Asia, and Australia. He also served as the President of AMEC’s global Environment & Infrastructure business. Prior to AMEC, Dr. Mahmoud worked for URS and their legacy companies Woodward-Clyde and Dames & Moore, where he played key roles of increasing responsibility in their Infrastructure and Environment business.

In welcoming Dr. Mahmoud to Golder Associates, Ian Smith, Lead Board Director, commented “Hiring our first external CEO represents a pivotal moment in the history of our great company. Hisham has all the attributes we sought to take the business forward. The common feature of his working life has been his ability to drive strategies that add value and generate business growth.”

Golder Associates has a footprint spanning major regions of the globe, working on complex projects across many sectors. Its clients represent a broad range of public and private sector organizations that include many internationally recognized companies.

For further information please contact the Golder Associates communications team at WITH PR on +44 207 249 7769 or golder@withpr.co.uk

Dr. Mahmoud holds a BSc in Civil Engineering from Qatar University, and a Masters and PhD in Geotechnical Engineering, both from Arizona State University. He is a registered Professional Engineer in several US states.