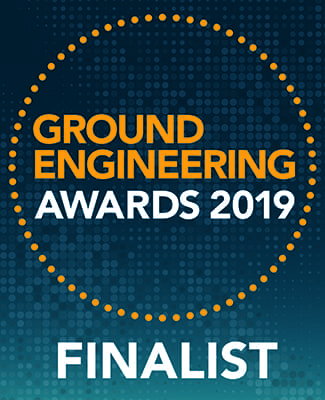 Golder and Transport for London Shortlisted for Ground Engineering 2019 Award

London, England — Golder and Transport for London have been shortlisted for a Ground Engineering 2019 Award, for the Turnham Green Signal and Equipment Rooms Project.

New rooms were required underneath Turnham Green Station to house vital signalling and power equipment for the delivery of a new Automatic Train Control signalling system, part of the Four Lines Modernisation (4LM) Programme, to upgrade the signalling systems of four of London Underground’s most important railway lines.

The plan required a concrete retaining wall to be constructed within an existing rail embankment that carries London Underground traffic during construction hours, to form six new asset spaces beneath the historic masonry viaduct, on which part of the station is sited.  This raised significant challenges, as the temporary works required to facilitate the development of the disused arches to construct the rooms was difficult, compounded by limited and difficult access, and construction was required to take place in close proximity to the operational railway.  As a result, excavation could not be carried out using large scale mechanical equipment.  A new approach was required.

“Golder helped unlock a problem for the wider project – how to safely implement the temporary support system during traffic hours without any closure or impact on safe operation of the railway,” says John Elliott, Golder’s Underground Division Lead.

Golder proposed an excavation and support system on the same premise as that is used for traditional tunnelling work undertaken utilising hand mining techniques, whereby discrete pockets of the embankment were opened to allow support to be introduced.  This enabled small pockets of challenging ground to be opened up and supported sequentially until a much larger excavation was formed of the composite smaller excavations.

The use of adaptive construction sequencing techniques was critical, as without the excavation technique the signal and equipment rooms would be unable to be constructed without a major closure.  Golder’s work allowed the team to model the entire effort and create a clear schedule of activities to manage the risks, without impact to rail operations.  Further, Golder conceived of and designed the temporary works in collaboration with the permanent works designer so they were fully integrated with the permanent works scheme.

“By looking at the problem in a different way, our team was able to surmount the challenge, making a significant contribution to the delivery of the signalling and equipment rooms project milestones, and in turn towards delivery of the 4LM Programme,” says John Elliott, Golder’s Underground Division Lead.

Ground Engineering Awards are handed out annually by EMAP to ground engineering industry leaders. The Awards ceremony will be held June 5 in London.