South Koreans are experiencing a heightened sensitivity to the management of radioactive materials since the Fukushima nuclear plant disaster on March 2011 in nearby Japan, as well as a series of earthquakes and aftershocks in South Korea including the 2016 Gyeongju (the most powerful in the country since modern recording began in the 1970s) and the 2017 Pohang earthquake.

The need to reassure the public has been particularly acute for the near-surface and underground nuclear disposal site for Low & Intermediate Level Radioactive Waste (LILW), which stores radioactive waste from commercial sources, hospitals, governments and other sources. Located in Yangbuk-myeon, Gyeongju City, Golder has been providing geotechnical services at the site since 2006.

Building this near-surface facility has involved excavating the side of a mountain, resulting in a large slope 250 metres wide by 50 metres high (820 by 164 feet). Any sign of instability or failure in this slope has the potential to increase public concern that the disposal facility is unsafe.

To reassure the public, the Korea Radioactive Waste Agency (KORAD) undertook a study to clarify the site’s geology, fractures and other factors influencing slope stability.

In such a large slope, there is room for many variations in soil and rock. To determine variations and identify weaknesses, Golder developed a detailed characterization of the soil, rock and geologic structures of the slope.

Using the detailed FracMan model, Golder simulated the impacts of potential seismic events on the slope including the most recent earthquakes in the country. The simulations also included the impacts of water saturation of the weak layer in the event of extreme weather. 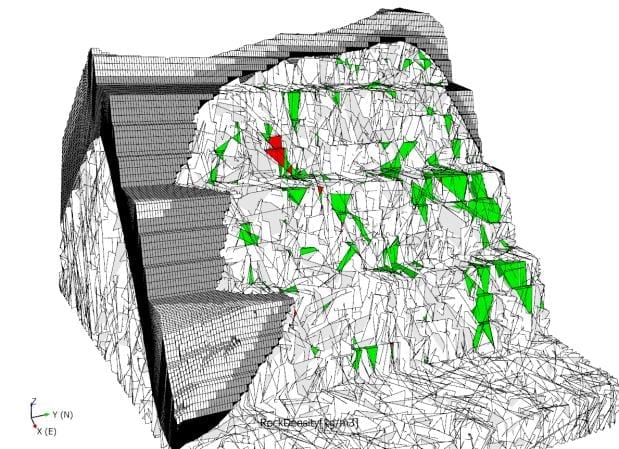 This strength in three-dimensional slope modelling helped the Golder team deliver significant findings to provide an accurate and detailed understanding of how the slope will perform under a range of potential circumstances.

First, the team was able to accurately calculate the effects of the thick surface layer of soil and weathered rock, which is particularly weak structurally, on the performance of the slope. Most fracture modeling software packages are unable to factor in the external loading provided by such a layer, but Golder’s FracMan® model can.

Second, the Golder team was able to factor in the potential effects of water saturation on the slope, particularly important because of the potential of the soil and weathered-rock layer to absorb water, adding weight.

Perhaps most important from the public’s point of view, the work was done through scientifically valid methodology, in a transparent and verifiable way, using well-established and demonstrably reliable tools. This builds trust and public confidence in the safety and security of the storage facility.