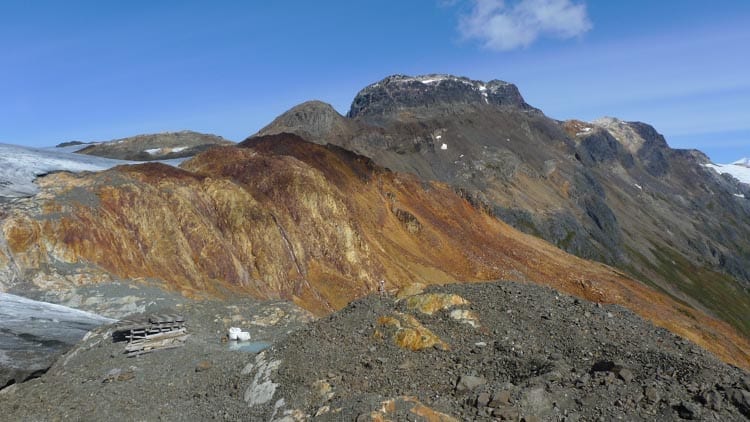 Golder is helping plan development of what could become one of the biggest gold-copper mines in the world, using an efficient and cost-effective underground mining method that offers the production of open-pit mining combined with the ability of underground mining to reach deposits at depth. That method, called block caving, is being proposed as an option to economically extract deeper mineral deposits, or those located in challenging terrain less amenable to open pit mining.

Seabridge Gold has several prospective gold-copper porphyry deposits in northern British Columbia, Canada, collectively known as the Kerr-Sulphurets-Mitchell (KSM) property. Some of the near-surface deposits can be extracted using open-pit mining, which can deliver large quantities of ore to the mill economically. But there are limits to the size and depth of these mines. Eventually, the cost of peeling back the overburden, disposing of the waste rock, and hauling ore up from greater depths becomes too much.  And, in some cases, underground mining may be a more amenable method in challenging mountainous terrain.

Accordingly, Golder has for the past 10 years been helping Seabridge push ahead with a two-prong approach at KSM. The first part of the plan is for traditional open-pit mining to reach the deposits near the surface. Block caving, which has been well proven at mines around the world, may be the answer to reaching the deeper deposits as the second part of the extraction plan (for more on block caving, see our Insights article here).

Golder established that some of the mineral deposits at KSM are suitable for block caving, being relatively large and fairly homogeneous in regard to the target minerals. The vertical nature of the deposits allows for block cave production with high ore columns and low dilution.

Golder helped determine that block caving could be done with an operating cost similar to that of the open pit as it deepens. Just as importantly, block caving would be able to deliver the volumes of ore comparable to open pit mining. This meant that the mill, set up to process ore from the open pits, would continue to operate at its usual efficiency when fed by the block cave mines.

One problem Golder addressed is the strength of the rock within the ore body. Normally competent rock is desirable to support a tunnel or other underground structure. At KSM, however, the high competence of the rock challenges the initial cave collapse, fragmentation and productivity.

To deal with this, Golder used drill core data and its proprietary FracMan® software to model the fractures in the rock to understand and estimate in-situ block sizes and how the ore body would fragment as it caves. These studies led to the incorporation of pre-conditioning the rock mass to be caved through hydro-fracturing. This pre-production conditioning of the rock by generating additional fractures is quite common in block cave mines globally and can be an effective solution to caving in stronger, competent rock. A benefit of the strong competent rock at KSM is the potential for longer life drawbells. This is an advantage for the block cave since it means a lower capital cost per tonne as more tonnes are serviced from the stronger, longer lasting drawbells.

Another challenge at KSM is water management. In an area with high precipitation including significant snow-pack in the winter, there is potential for mine flooding. Golder’s team helped design underground tunnels to transport water, store it and pump it out of the underground workings. Water treatment will meet or beat the necessary water quality measures for release back to the environment.

Currently, KSM is still finding new resources that are significant in size and grade. Golder continues to support Seabridge in delineating and characterizing the deposits and refining engineering parameters for the KSM Project.