It’s a bet-the-company project for a junior oil company – development of a large hydrocarbon reservoir in difficult geology in Central Asia. This means a pressing need to get the most value possible from money spent on drilling wells, and to recruit and retain investors with a tolerance for long odds.

While the company has already had some success producing hydrocarbons from the target rock formation, it needed a clearer picture of the geology inside the oil and gas reservoir of fractured carbonate rock.

That is because although this type of rock can be highly porous, if those pores are not connected by fractures that allow fluids to move, it will be difficult to pull hydrocarbons into the wells. Due to the significant differences in permeability within the reservoir, it is important to determine which are the most promising areas to drill into.

Accordingly, the company asked Golder to develop a computer-based model of the fractures in the rock. Golder used its proprietary FracMan® software, which uses a Discrete Fracture Network (DFN) methodology to understand a rock body’s fracture network, in a 3-D environment.

The simulated data in the model is helping the company plan its drilling program. 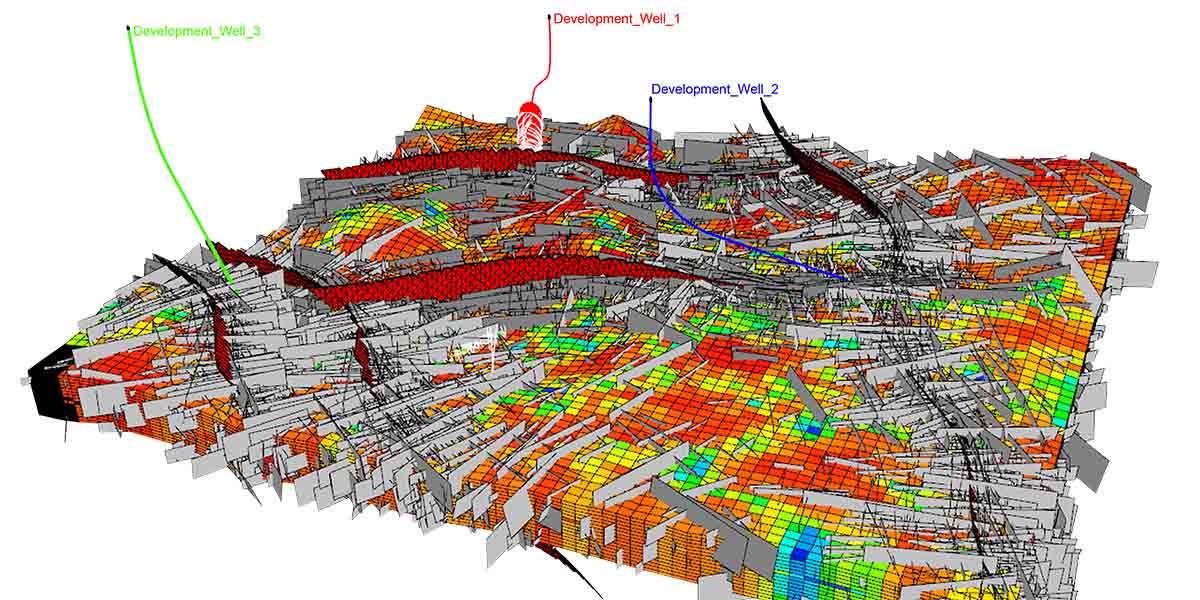 One of the major strengths of Golder’s model lies in history matching – comparing actual data derived from the existing wells, including the pressure drop in each well as hydrocarbons are produced, against the simulation laid out in the computer-based model. A key benefit that Golder’s workflow provides, the ability to do hydraulic calibration of the fractures and faults in the field, provides insights into how fluids move through the rock mass. Data from tests carried out in existing wells can be extended in three dimensions throughout the entire field.

This in turn allows for estimates of extractable reserves under various possible drilling scenarios, helping to plan the position and configuration of wells, and establishing budgets for future activity. Having this information based on a well-established and proven methodology also helps reassure investors that the company’s decisions are based on good information.

One of the key advantages of the FracMan-based process is that it can provide the client with a high case and a low case model. This indicates how much variability there is around the model, which is important for investors who want to do uncertainty analysis to determine what the big questions and the risks are.

Another benefit of having the FracMan model data is that it helps the company avoid water inflow to the wells intended to produce hydrocarbons, something that would have a severe impact on the performance of the wells.

The company has been pleased with the simulated data that Golder has been able to provide and is making plans for carrying out the same workflow to analyze another, deeper, potential hydrocarbon resource.