Home Projects Solving a Groundwater issue at an Italian Landfill

Solving a Groundwater issue at an Italian Landfill 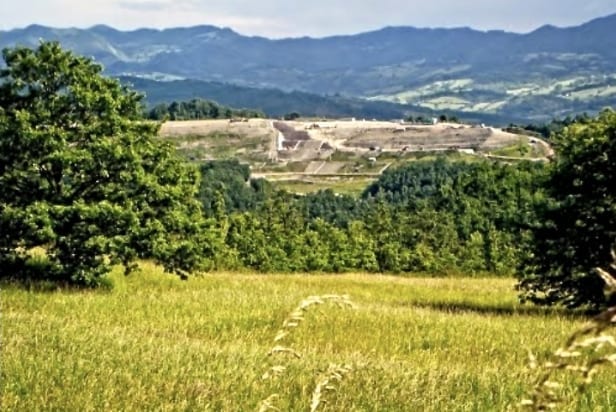 When the owners of “Il Pago” landfill near Florence, Italy found higher-than-expected levels of heavy metals in groundwater and surface water near their landfill, they were both concerned and puzzled.

Il Pago is designed to meet Italian requirements and international best practice for landfills for municipal solid waste. It is underlain by a two–millimetre-thick (0.08 inch) layer of high-density polyethylene over a metre-thick (three foot) base of clay. A system of pumps and pipes collects the leachate, which is water from precipitation that has picked up contaminants as it flowed through the landfill, for treatment. And yet routine monitoring of groundwater near the site, as required by regulators, identified levels of heavy metals that were above regulatory requirements.

The question was: had defects or breaks in the liner allowed leachate from the landfill to flow into the surrounding environment? One theory was that the soil and water in the area around Il Pago are naturally high in some of the heavy metals that might also be expected to come from a landfill.

As required under Italian law, Il Pago’s owners notified the regulators of the problem, and Golder was commissioned to investigate whether the heavy metals occurrence was due to natural soil composition, contamination from the landfill, or another reason/source. Golder’s work involved studying 11 existing monitoring wells and collecting samples of landfill leachate, groundwater from the monitoring wells, and surface water from nearby streams. What Golder determined was that constituents in the ground and surface waters did in fact match those often found in leachate from a municipal landfill. However, the team felt additional analysis was required and brought in a world-renowned authority based in Italy, Centro Nazionale delle Ricerche, to apply further testing involving isotope analysis.

This test involves tritium, which is a radioactive isotope of hydrogen that is extremely rare naturally, but can be produced by irradiating lithium in a nuclear reactor. Tritium is used as a radioactive tracer, for luminescent paint, as well as for luminous watch dials and instruments. When products using tritium are disposed of in landfills, water flowing through the landfill can pick up trace amounts of tritium, which may be found in the landfill’s leachate. This means that if samples of groundwater and surface waters near a landfill contain tritium higher than expected in nature, which is a strong indication that the landfill’s leachate is leaking from the landfill and mixes with nearby groundwater and surface water. However, if testing finds that levels of tritium are at naturally-occurring levels, it is likely that the leachate management system is working as intended.

In the case of Il Pago, Golder’s waste team was able to determine that tritium levels in the surface and ground waters matched those that would be expected in the natural environment. Golder’s report concluded that the landfill was therefore not responsible for any changes in the characteristics of the water.

Following on the experience of Il Pago, Golder has applied tritium analysis to several other landfills in Italy. In each of those cases, Golder provided support to landfill owners to determine if landfill leachate contributed—or does not contribute—to constituents in the surface and ground waters. The results of these studies saved landfill owners millions of dollars in unnecessary remediation efforts that would not have addressed the actual source which exists within local natural environment conditions.