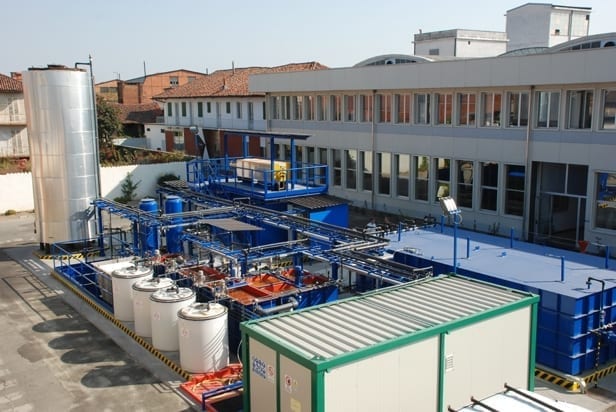 Contamination was detected in soil and groundwater at a manufacturing facility in northwestern Italy, during a change in ownership of the plant.

Leakage from an underground basin, which has since been removed, was detected, along with a spill from an aboveground basin located in the chemical department.

The remediation system that Golder designed, which has since been approved and installed, can best be described as “an active cell of recirculating groundwater.” The system includes a hydraulic barrier, which is located downgradient of the source area and the leaking aboveground basin, and is designed to collect the contaminated groundwater. The water pumped from this barrier is sent to a physical-chemical treatment plant that eliminates contaminants such as metals, phenols and other organic compounds.

The treated groundwater is then supersaturated with oxygen by pressurised aeration towers (PAT) and sent to injection wells located upgradient of and close to the source area. There, the oxygen-supersaturated water reacts with the impacted soil and groundwater, flowing towards the barrier to be extracted and treated again. The PAT and injection wells are the core components of the remediation system.

Among the benefits of the system are containment of the diffusion of the contamination before the plume reaches the site boundary; allowing the “washing” of the impacted soil under the buildings; and avoidance of needing clean water to supply the PAT.

This is the first time PAT has been associated with a hydraulic barrier, a treatment plant and a system of wells for the reinjection of the treated groundwater.