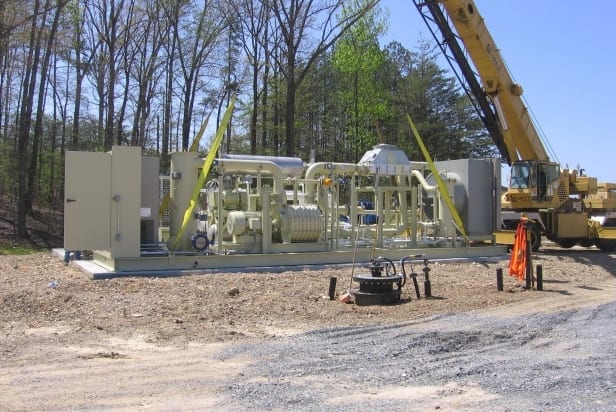 Initially, Golder estimated the quality and long-term sustainability of LFG production to help establish the potential for recovering and selling the gas. The value of the extracted LFG primarily lies in the methane content, which can be used as a substitute for natural gas fuel for boilers at a nearby industrial facility. In the initial stages of the project, we completed a series of pumping tests for LFG at three separate landfill units at the site. Two of the landfills were closed with a final cap installed, while the third landfill unit is active and accepting waste. Golder provided assistance with negotiating the contract for LFG end use, then prepared the designs for the project.

The treatment system includes multistage compression, refrigeration (by a glycol chilling system), gas reheating, and gas flow and quality metering. The LFG is compressed to about 20 psi, chilled to a 40°F dew point temperature, then reheated to 90°F prior to introduction into the pipeline. Golder coordinated design and permitting of a two-mile pipeline from the landfill facility to a local chemical facility so that the gas could be used in the facility boilers. The pipeline was designed consistent with Federal pipeline safety requirements, as set forth in 49 CFR 192 – Pipeline Safety Regulations. The system began operation in June 2008 and is delivering 600 scfm to 1,000 scfm of landfill gas to the facility.