Many industrial sites around the world have used fire-fighting foams and other materials containing the class of chemicals known as PFAS (per- and polyfluoroalkyl substances). PFAS were developed more than 50 years ago and became popular as they can impart a range of useful properties to products, such as the ability to repel water and oil, and resist chemicals. Over time, however, PFAS were found to accumulate in the bodies of living organisms, including humans, potentially causing unintended environmental or human health impacts. What’s more, some PFAS are highly leachable, travel significant distances and persist within source areas decades after being released. Unlike many other contaminants, PFAS are difficult to destroy and won’t naturally degrade, which makes remediating PFAS contamination challenging.

At a major facility in the Australian state of Victoria, Golder worked with a client to develop a pragmatic approach to rapidly identify and prioritise PFAS risks. The result is a good news story for the community, client, regulatory agency and environment.

Golder took on the challenge of developing and implementing a strategy to address the PFAS contamination at the site. An Environment Protection Authority (EPA) Clean-up Notice had been issued and the site was subject to an environmental audit. There was a need to quickly understand key risks and develop a plan to address those risks. Golder embarked on developing a clean-up plan for the site, setting out a roadmap of clear milestones towards completing the audit.

Having identified that surface water was a key transport pathway for PFAS at the site, Golder applied a targeted approach to sampling that would save cost and time compared to traditional soil sampling approaches. Over a three month period, the team mapped out the surface water drainage system and took samples at key points and features within the drainage network. This information was used to estimate the annual PFAS mass contribution of each source area. We grouped the results into orders of magnitude, considered in terms of human health and environmental risk, and ranked them into high-, medium- and low-priority groupings. Through this innovative process, the many potential source areas of concern were rapidly reduced to only four high-priority areas for further consideration for management or remediation.

Once the four high-priority areas had been identified, the Golder team worked with the client to ascertain easily achievable maintenance and clean-up actions that could yield ‘quick wins’ at relatively low cost. With some simple solutions – such as clearing sediment pits, cleaning drains and managing surface water – PFAS concentrations were reduced by more than an order of magnitude. The EPA-appointed Auditor and EPA embraced these high-impact wins as a good news story and an indication of the client’s commitment and momentum towards mitigating risks.

Golder prepared and documented the Conceptual Site Model (CSM) demonstrating the complete pathways from sources to receptors, which was a key component in understanding and communicating the risks associated with the site.

To build the CSM, we mapped the flow paths of surface water across the site and from the site into surrounding areas. Flow modelling was essential to confirm the key surface water flow paths. The results allowed us to focus the scope of the investigation and avoided lengthy and unnecessary intrusive investigations. Targeted soil sampling and risk assessments were undertaken for the few areas potentially affected, and the overall risks to human health and the environment were assessed to be low.

The analysis of the sources and concentrations of PFAS both on and off the site has been supported by fingerprinting samples for PFAS composition. This helped the team develop a robust understanding of PFAS distribution and movement both on and off site.

Golder worked with the client to develop a pragmatic and cost-effective strategy for cleaning up the fire training area, one of the four high-priority areas. The remedial strategy combined mitigation approaches including surface water containment, re-sealing of concrete and limited removal of surface soils in key hotspots. This approach allowed the fire training area to remain active. 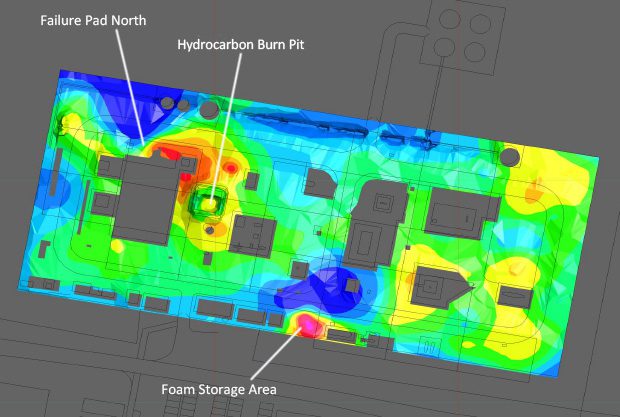 3D modelling of the fire training ground produced a ‘heat map’ that helped assess the PFAS concentrations and understand how these reduced with depth. Guided by the modelling, the team was able to assess the volumes of soil that needed to be removed and to compare the relative costs under different remediation scenarios.

Highly targeted soil removal combined with the use of a relatively low-technology, lower-cost approach of re-concreting and re-asphalting was considered the optimal solution to minimize interruption to activities at the operational fire area while extending its life by many years.

Golder prepared the technical specification documentation to support tendering and implementation of the remedial works and continues to provide design and technical support. The first stage of works was completed in 2020, with the second of the three remedial stages completed in mid-2021.

Continuing on the right path

Building on the significant efforts already undertaken to reduce the overall risk to the environment, the current remedial focus is on developing a targeted, pragmatic mitigation strategy for the other high-priority source areas elsewhere at the facility. Golder has prepared a PFAS site management plan which includes targeted assessment to monitor for changes in surface water quality following implementation of mitigation, and monitoring of sentinel locations off-site to check that the risk profile remains low and acceptable. The 53V Environmental Audit was submitted to EPA Victoria, and Golder will continue to provide support to implement the site management plan.