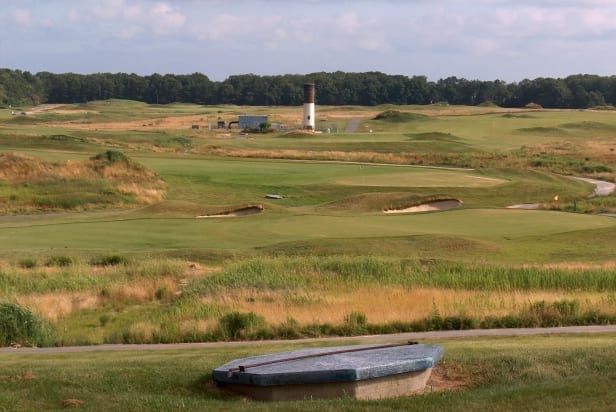 McCullough’s Emerald Golf Links 18-hole course in Egg Harbor Township is described as a unique tribute to famed European courses such as St. Andrews. Water comes into play on five holes and McCullough’s offers the region’s only 100-foot elevation changes – providing players tremendous vistas of the course and countryside. However, as golfers travel from green to green or travel in carts over the winding paths, they are likely unaware that the rolling green hills was once the 100-acre Pinelands Park Landfill that received municipal solid waste from the 1950’s until its closure in 1992. The landscape design for McCullough’s course was chosen as much for its charm as it was to keep within the regulatory guidelines of the New Jersey Department of Environmental Protection (NJDEP). Trees, for example, are unable to be planted upon a closed landfill, as the roots could dig into and break the protective impermeable cover.

Golder provided post-closure O&M support services, including design and construction oversight related to maintaining and upgrading the landfill gas collection (produced from the natural decomposition of household waste) and leachate management systems. During construction, Golder monitored the impact of golf course construction on the existing landfill management structures and systems, including landfill gas extraction wells, leachate and condensate pump stations, and surface water management features. We acted as liaison between the landfill owner and the Egg Harbor Township Golf Corporation, and as the point of contact with the architect and construction contractor.

The Pinelands Park Landfill contains several lining and cover systems, as well as two stormwater management infiltration ponds, a leachate storage facility, and an active landfill gas extraction system, including an enclosed flare; these were blended into the course’s designs so as not to be obvious to the golfers as they walked the course. The golf course design and construction specifications also needed to be compatible with the landfill owner’s on-site environmental controls. The architects had to keep the existing closure cover system intact, so all surface shaping was done with imported soil. Putting what was in some cases several feet of soil over a waste mass posed obvious surface settlement issues that had to be dealt with prior to construction. They also had to work around the nearly 100 landfill gas extraction wells, leachate sumps, and condensate pump stations. Most of these are located on the perimeter of the site, away from the line of play. The work included installing all of the landfill gas extraction wells in encasements, so that these structures are well protected from the golfers, and vice versa. Finally, the enclosed flare in the middle of the landfill was repainted to resemble a lighthouse. The end result was witnessed on Memorial Day in 2002 when McCullough’s opened to general acclaim. This is just one of a growing number of closed landfills that are being re-developed into a useful, attractive part of New Jersey.